Kollnburg – the carnival stronghold of the Bavarian Forest In the beginning of January the people of Kollnburg, under the direction of the carnival association “The Castle Fools,” elect the “Pair of Princes”, that controls the village with its carnival government and the fabulous guard ladies at the “Inthronisierungsball”. For the whole duration of the carnival every weekend is filled with colorful carnival balls. As the climax, every year the misfortunes of villagers and neighboring villages are made fun of on Carnival-Sunday. The “Gaudiwurm” crawls through the narrow streets of the small castle village and ends at the village square. There, each carriage is presented and at the traditional “Faschingssupp ESSN” in the hall of the castle inn the celebrated goes on. More info at: www.burgnarren-kollnburg.de

Farmers theatre in Kollnburg – an annual spectacle Annually, at the turn of the year the theatre group of the FF Kollnburg practices a funny three-act show and presents it on the stage of the hall at the inn “zum Bräu”. Dates: 2nd Christmas Day (afternoon and evening), on New Year’s Day and on Epiphany Day.

Home festivals In the Bavarian Forest, people do not only talk about the long-established customs – they are practised and experienced. Flag consecrations, Corpus Christi, anniversaries of the clubs, Thanksgiving. The closeness of the population with traditional customs and practices is expressed on many occasions. The relevant dates can be found in our calendar of events.

Erection of the maypole Every year on 30th of April or 1st of May the maypole is put up is in the village square in Kollnburg and in many villages around Kollnburg only by muscle strength and with the help of so-called “Schwaiberln”. Decorated with the wooden guild signs and crowned by the ribboned tree and thick wreaths it announces tradition and hospitality widely until autumn.

Boards of the dead 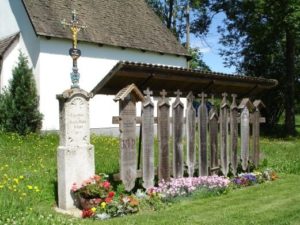 Boards of the dead – a piece of national culture. They symbolize a deep-contemplative tribute to the dead, for which the people of the Bavarian Forest are traditionally known for. The custom of putting up the wooden commemorative plaques is practised once again today. Citizens remember the people and their destinies, and respect those who have these signs. Previously the boards of the dead met a purely practical function. Until the carpenter had made the coffin, the bodies of the deceased were wrapped in a linen cloth and laid on a board. In the belief that the soul can only ascend to heaven after the dilapidation of the Dead board, the labelled board – often with a slogan that was sometimes humorous intending to ease the painful loss – was put up under mighty trees or forks to let it rot freely in nature. It was believed that the soul could only rise from purgatory into heaven through this procedure. 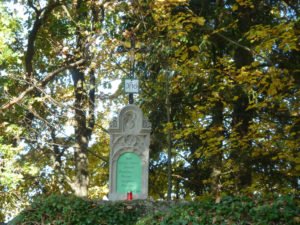 Frequently, one encounters roadside crosses, which were put up because of devoutness or in memory of deceased, at the field- or forest edge, while hiking in the Bavarian forest “Marterl” are memorial crosses or stones, which remind of lethal accident victims at the place
of the mishap.