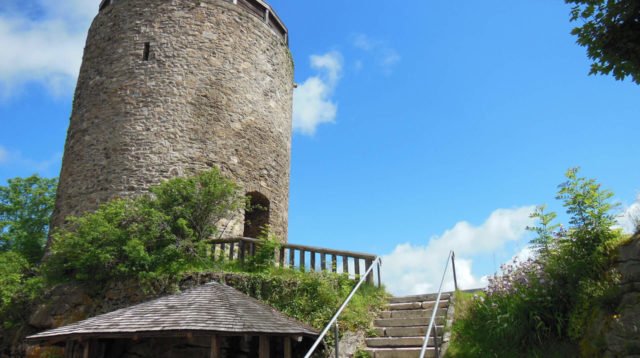 The castle tower (11 m) and the castle well (17.5 m) are the landmarks of Kollnburg. The castle was built in the middle of the 12th century to protect the treasure of the “Grafen von Bogen” who dominated the whole middle Mid-Bavarian Forest throughout the 13th Century. According to the legend, this treasure is still somewhere in the castle tower. (also see legends and myths). In 1468 the castle was partially destroyed in the “Böckler” war Since 1835, the castle tower is in bourgeois hands and now in the possession of the forest association section. At the time of the counts the castle well was the central water supply of Kollnburg. Today, the is still some groundwater available. These days the castle is a popular tourist destination. Every year both tourists and locals visit the castle for cosy garden festivals in the courtyard, or climb the tower because of the fabulous panoramic view on the highest mountain peaks of the Bavarian forest.